Summer is almost here and Sierra Nevada has put together another series of Beer Camp beers in collaboration with 31 different breweries all over the United States. Collaborating with breweries of the likes of Odell Brewing Co, Melvin Brewing, Creature Comforts, Trillium Brewing Company, Lawson’s Finest Liquids, and tons more, Sierra Nevada travelled all over to brew with some of the best in the business to create some unique collaborative beers. Aside from the 12-packs at your local beer store, finding all these special beers in one spot will be a challenge, and in Fort Collins we’ll be the only place to have them ALL on tap at one time.

We were lucky enough to get ahold of all SIX 2016 Beer Camp collaborations and we’ll be hosting a tapping party on Thursday, June 9th at 5PM.

Here’s a look at the line up…

“The south holds strong to its tradition flavors – tea, honey-sweet peaches and corn grits – so we looked at those culinary cues for this souther-inspired table beer. With a folder grainy alt body and complex tangy finish from the fruit, tea and herbs, Sweet Sunny South is perfect for sultry summer sipping.”

“The city of Moxee, WA, is in the heart of the Yakima Valley hop growing region and this Imperial Session IPA – a style contradiction – honors the Pacific Northwest’s hop-bomb heritage. Moxie-Moron features hops in the mash, the kettle, the Hop Torpedo, and the fermenter for ultra-complex hop aromas and flavors in an ironically named package.

“West Latitude combines our Californian Left Coast love of fruity hops with a touch of Hawaiian “aloha” from the addition of hibiscus flowers, all anchored by robust malts and spicy rye. This session beer is light in body but looms large, like the long shadows of a westward setting sun.”

“Pat-Rye-Ot is an ‘old-meets-new’ take on a pale ale by breweries all located in the original 13 colonies. It features rye and apples, which were among the first ingredients used by American brewers in the colonies, alongside bold American hops – hallmarks of our modern craft beer ‘revolution’.”

Stout of the Union (Robust Stout) –

“This stout hails from the land of sun, and surf and proves that beach beer doesn’t have to be light colored and delicate. Stout of the Union is rich, toasty and full of deep malt flavor, creating a union of like-minded brewers together through beer.” 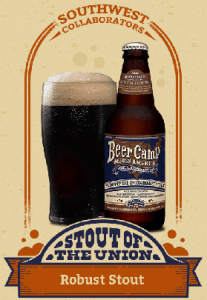 Come try them before they are all gone!