Getting to Know Black Bottle Brewery and Craft Beer 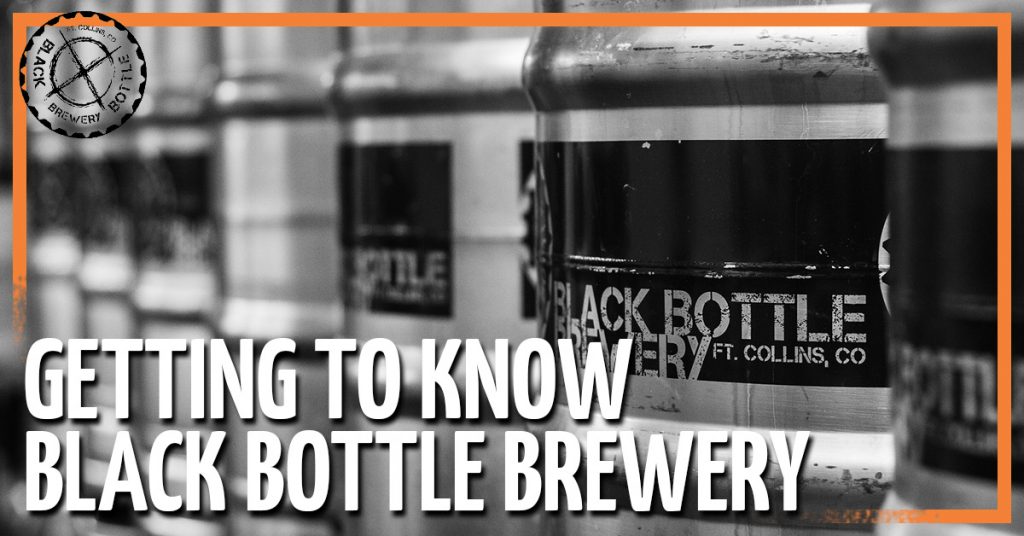 When you take a look at the craft brewing climate in Fort Collins, or anywhere in Colorado for that matter, you generally find the same look, the same ideas, and the same focus on specific trends. Those trends being: bikes, the green movement, dogs, and mustaches. To put it in one word: Hipster.

As Colorado has come to the forefront of the craft-brewing scene in North America, it has also developed this attitude toward craft beer that is pretty pretentious, if you ask us. While we can’t speak for every brewery (or beer drinker) in Colorado, we can at least attest to the current climate of brewing in Fort Collins.

We here at Black Bottle Brewery, create beer for beer’s sake. Nothing more, nothing less. The cloud of pretentiousness that has seemingly moved in over the craft beer territory is laughable to us. While the process of brewing kick-ass beer is certainly to be respected, we like to make sure we’re not taking ourselves too seriously. The way in which we brew certainly takes time, effort, and attention to detail, but how we share our brews with our beloved beer-drinking community has always been about loving beer and the many directions you can take it. For us, brewing is a passion and our brewery is built on how we share it with our fellow beer lovers. Why complicate it?

This attitude is exactly what got us started and what keeps us going. Our owner and head brewmaster Sean Nook, has taken his rebellious attitude and applied it to the craft brewing world. Black Bottle Brewery is the end result of a Fort Collins skater punk turned successful business owner and creative brewer. There’s not a thing about Black Bottle that isn’t reminiscent of the “stick-it-to-the-man” attitude. In the case of the craft brewing industry, it’s more of a “stick-it-to-the-norm” type attitude.

If you’ve met Sean, then you know exactly what we’re talking about. If you haven’t met Sean, that’s a bummer, but fortunately, you can read below and more or visit the brewery sometime and find him there.

Here’s Looking at You Sean

What got you started with brewing?

In all honesty, I’m not sure. I grew up here in Fort Collins and as you know, good craft beer has been a staple of this town for quite some time now. When I was underage, I enjoyed drinking beer from New Belgium, mostly their Fat Tire and beers from Coopersmith’s. I knew I didn’t want to drink the “beer” my dad like to drink which was MGD. Then I got into cooking and that’s when I started gearing even more towards craft brewing. I thought I wanted to be a chef but I learned that it wasn’t for me. But brewing beer is a lot like cooking, in that I liked doing it for my friends. I love making shit with my hands and beer has allowed me to fulfill that need. I got more and more into home brewing while I was a mechanic, which I got sick of, as well. I realized that I was actually pretty good at home brewing and it only made sense to open my own brewery in Fort Collins. For those that are looking to do the same, I wouldn’t recommend it. We’re pretty crowded up here.

What is the inspiration for your beer?

Give credit to my family and friends for inspiration, but you can also blame my ADD.

What’s in the brewery’s future?

Some pretty exciting things actually. We’re going to be bottling 12-oz beers at the end of August and then we’ll move to canning soon as well. We’ll be selling six packs and then four packs.

In the years to come we’re looking to open another brewpub.

How do your past and personality play a role in your brewing process?

The whole brewery design, attitude, and image is a part of my personality. I grew up as a punkrock/hip-hop kid.. getting into trouble all the time, playing the drums in bands, and listening to music has a lot to do with it. Besides music, skateboarding has been the biggest influence in my life. Growing up as punk-rock skater in the late 80’s and 90’s, I was apart of a much edgier, cooler and different community. It was a lot like the brewery scene is now: new, exciting, and the thing to do. My parents hated it and that was a big reason I loved it. Both skating and brewing have been around a long time, but when I started brewing (much like when I started skating) it was cooler, more unique. When I got into brewing eight years ago, it felt a lot like when I got into skating. It was cool and then it was sold out. Good thing for us is that we’re the 10th craft brewery to hit Fort Collins, so we got started at a time where it was still unique. We were different then and we’re still different now.

The entire brewery is a reflection of my personality and my past. Even the type of skater I was plays a huge role in our style. There were three types of skaters when I was in the scene: A vert skater was the type who skated ramps, pools, half pipes, etc.; which was kind of repetitive. There were park staters who always wore a helmet and stayed within the boundaries, and their mom would drop them off and pick them up in a soccer-mom van. Then there were the street skaters, which was where I fell into the mix. We’d skate after dark, in prohibited areas, we’d smoke, we’d party and we had a good time. It was rebellious for sure. There was more freedom to street skating than the other types and I loved that. No one was telling us what to do, there was no coach. We got threatened by cops and business owners for skating in NO SKATEBOARDING areas and we had to be creative in our styles. We’d make up tricks and other groups would follow.

The same seems to keep happening for the brewery. If Black Bottle were to fall under any category of skater, we would be a street skater. Not following the rules and trying new things are a huge part of our personality as a brewery.

What has growing up in Fort Collins done for you as a brewer?

Growing up here has helped a lot. I think having been raised here gives me an edge when it comes to brewing. Having actually grown up here helps me get support, because of all the connections I’ve made over the years.

Does the Fort Collins community have an effect on your beer?

It does in some sense. But we brew beer we want to drink, and the thing is, I’m from here, and having grown up here has had an effect on the way I think of beer and how I brew it still. So in a roundabout way, yes it does. Drinking our beer means you’re drinking a part of Fort Collins.

What beers do you believe to be a staple of your brand?

We’re random as hell and that’s a huge part of our style. It defines us. I think people like us because we brew so many different types of beers. We have beers that we brew more than others but I love all of the beers that we create here.

You guys tend to be bold in your brewing, has your boldness ever backfired?

Yeah it definitely has. We’ve brewed beer that was ahead of its time and people didn’t really get it. We’ve also had to deal with people only wanting IPA’s and not wanting to try other beers. Fort Collins beers drinkers are still growing their pallets and we have to face that sometimes. In a marketing sense, we’ve definitely had to say sorry, but we’d rather ask for forgiveness than permission any day.

What is the beer you’re most proud of and why?

Friar Chuck.
This beer is one of my oldest recipes and it was named after my father who passed away nearly three years ago. We won our first Great American Beer Fest medal for this beer which came just after his death. I couldn’t think of a better tribute.

What Are the Squirrels All About?

A Brewery in Fort Collins with A Kick

Clearly, Black Bottle Brewery in Fort Collins is a different breed of animal. From our rebellious attitude to our adventurous brewing endeavors, we’ve been a brewery that gladly goes against the grain. We have no interest in being like the rest and do everything we can to remain unique in every sense of the word. And while we take a stand against the norms of the brewing community, you’ll never see the quality of our beer falter. There’s a lot that could be said about us, but bad beer isn’t one. We put a lot into our brewery, and our beer, and want to make sure that our food and the environment we provide are equally great. We work to make sure that our beer is delicious while also making sure that we never take ourselves too seriously. It’s important to us to always be different but to also be apart of the Fort Collins craft beer community. We don’t always do everything right, but we make sure to brew our beer right, bringing beer lovers something new and fresh, inticing and, above all, tasty.

Come try our beers and find out what it means to brew differently in the beer mecca that is Fort Collins. You won’t regret it.

Check out the video to learn a little bit more about our kick ass brewery.